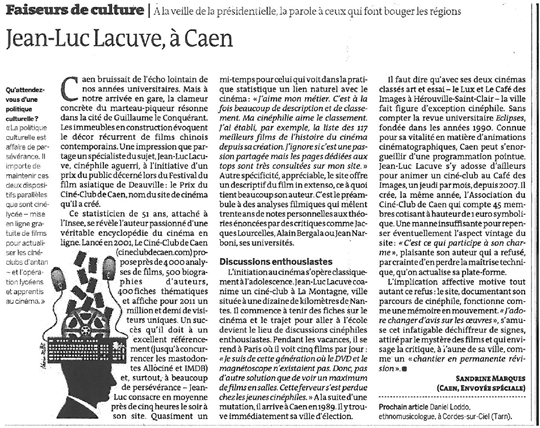 Caen rustled the distant echo of our college years. But when we arrived at the station, the clamor of jackhammers concrete rings in the city of William the Conqueror. Buildings under construction evoke the scene of recurring contemporary Chinese films. An impression shared by a subject expert, Jean-Luc Lacuve, seasoned cinephile, initiated a public prize awarded at the Asian Film Festival of Deauville Award Cine-Club of Caen, site name film he created.

The Statistician 51, attached to the INSEE, the author proves a real passion for cinema online encyclopedia. Launched in 2001, The Film Club of Caen (cineclubdecaen.com) offers nearly 4000 film analyzes, 500 author biographies, 400 thematic sheets for 2011 and displays and a half million unique visitors. Success he owes to a great SEO (up to compete with behemoths Allociné and IMDB) and, above all, perseverance - Jean-Luc spends an average of nearly five hours in the evening at his site. Almost a half-time for one who sees in statistical practice is a natural link with the cinema: "I love my job. This is both a lot of description and classification. My cinephile loves the ranking. I established For example, the list of 117 best movies of cinema history since its inception. I do not know if this is a shared passion but the pages dedicated to the very tops are available on my website. "Another specific, substantial, the site offers a description of the film verbatim, what the author is keen. This is the preamble to analyzes that combine film thirty years of personal notes to the theories set forth by critics like Jacques Lourcelles, Alain and Jean Narboni Bergala, its universities.

The introductory film takes place during adolescence classically. Jean-Luc Lacuve co-hosts a film club in La Montagne, a town some ten kilometers from Nantes. He began to hold sheets of film and the way to go to school becomes a place for discussions enthusiastic moviegoers. During the holidays, he went to Paris where he saw five films a day: "I am of that generation where the DVD and VCR did not exist. So no alternative than to see a maximum of films in theaters. This fervor was lost among young moviegoers. " As a result of a mutation, he arrived in Caen in 1989. He immediately found his chosen city. Although with his two arthouse cinemas classified - and the Lux Café Images Herouville St. Clair - the city is an exception cinephile. Besides the academic journal Eclipses, founded in the 1990s. Known for its vitality on animation film, Caen can boast an edgy program. Jean-Luc leans against Lacuve also to run a film club at Café Images, one Thursday a month, since 2007. It creates the same year, the Association of Cine-Club of Caen, which has 45 members of defined height of a symbolic euro. A windfall possibly insufficient to rethink the vintage look of the site: "This is what contributes to its charm," jokes the author who has refused, for fear of losing mastery technique, which updates its flat platform.

The emotional involvement just as motivated this rejection: the site, documenting its cinephile course, functions as a memory in motion "I love change your mind about the works", this tireless fun deciphering signs, attracted by the mystery movies and considers critical in terms of his city as "work in permanent revision" .